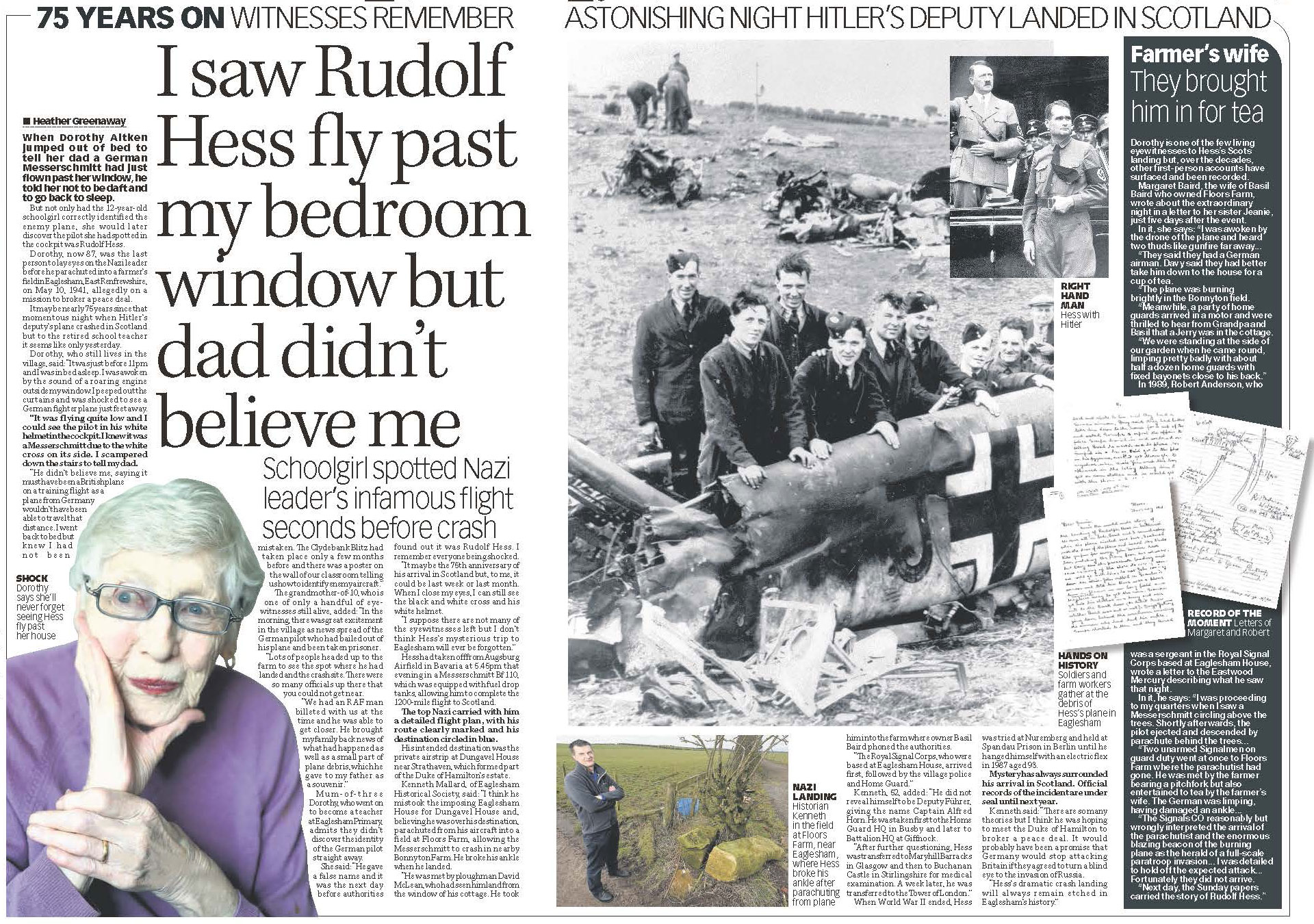 Posted at 00:01h in News, Village by admin
Share

WHEN Dorothy Aitken jumped out of bed to tell her dad a German Messerschmitt had just flown past her window, he told her not to be daft and to go back to sleep.

But not only had the 12-year-old schoolgirl correctly identified the enemy plane, she would later discover the pilot she had spotted in the cockpit was Rudolf Hess.

Dorothy, now 87, was the last person to lay eyes on the Nazi leader before he parachuted into a farmer’s field in Eaglesham, East Renfrewshire, on May 10, 1941, allegedly on a mission to broker a peace deal.

It may be nearly 75 years since that momentous night when Hitler’s deputy’s plane crashed in Scotland but to the retired school teacher it seems like only yesterday.

Dorothy, who still lives in the village, said: “It was just before 11pm and I was in bed asleep. I was awoken by the sound of a roaring engine outside my window. I peeped out the curtains and was shocked to see a German fighter plane just feet away

“It was flying quite low and I could see the pilot in his white helmet in the cockpit. I knew it was a Messerschmitt due to the white cross on its side. I scampered down the stairs to tell my dad.

“He didn’t believe me, saying it must have been a British plane on a training flight as a plane from Germany wouldn’t have been able to travel that distance. I went back to bed but knew I had not been mistaken. The Clydebank Blitz had taken place only a few months before and there was a poster on the wall of our classroom telling us how to identify enemy aircraft.” 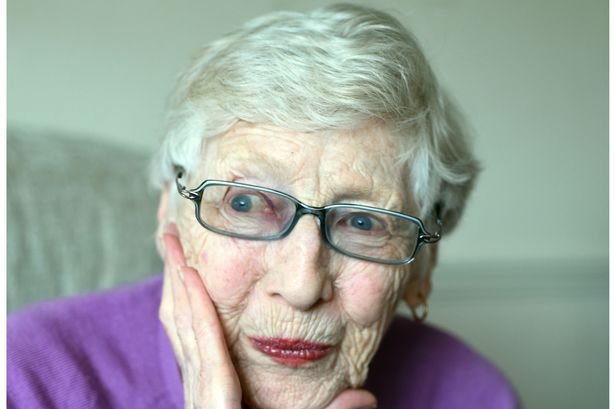 The grandmother-of-10, who is one of only a handful of eye-witnesses still alive, added: “In the morning, there was great excitement in the village as news spread of the German pilot who had bailed out of his plane and been taken prisoner.

“Lots of people headed up to the farm to see the spot where he had landed and the crash site. There were so many officials up there that you could not get near.

“We had an RAF man billeted with us at the time and he was able to get closer. He brought my family back news of what had happened as well as a small part of plane debris, which he gave to my father as a souvenir.”

Mum-of-three Dorothy, who went on to become a teacher at Eaglesham Primary, admits they didn’t discover the identity of the German pilot straight away.

She said: “He gave a false name and it was the next day before authorities found out it was Rudolf Hess. I remember everyone being shocked.

“It may be the 75th anniversary of his arrival in Scotland but, to me, it could be last week or last month. When I close my eyes, I can still see the black and white cross and his white helmet.

“I suppose there are not many of the eyewitnesses left but I don’t think Hess’s mysterious trip to Eaglesham will ever be forgotten.” 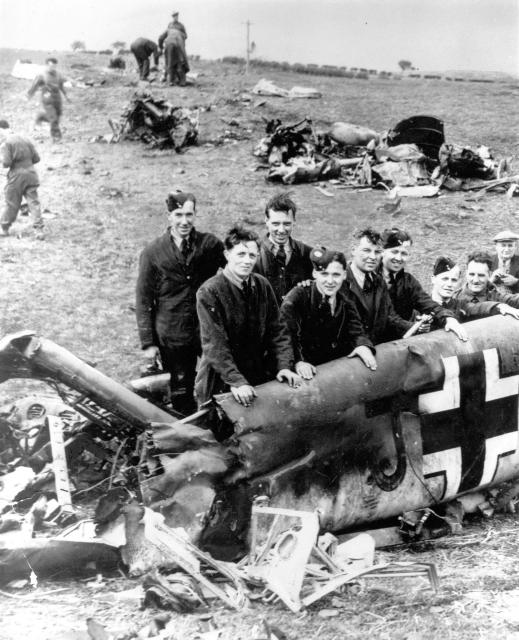 Hess had taken off from Augsburg Airfield in Bavaria at 5.45pm that evening in a Messerschmitt Bf 110, which was equipped with fuel drop tanks, allowing him to complete the 1200-mile flight to Scotland.

The top Nazi carried with him a detailed flight plan, with his route clearly marked and his destination circled in blue.

His intended destination was the private airstrip at Dungavel House near Strathaven, which formed part of the Duke of Hamilton’s estate

Kenneth Mallard, of Eaglesham Historical Society, said: “I think he mistook the imposing Eaglesham House for Dungavel House and, believing he was over his destination, parachuted from his aircraft into a field at Floors Farm, allowing the Messerschmitt to crash in nearby Bonnyton Farm. He broke his ankle when he landed.

“He was met by ploughman David McLean, who had seen him land from the window of his cottage. He took him into the farm where owner Basil Baird phoned the authorities.

“The Royal Signal Corps, who were based at Eaglesham House, arrived first, followed by the village police and Home Guard.” 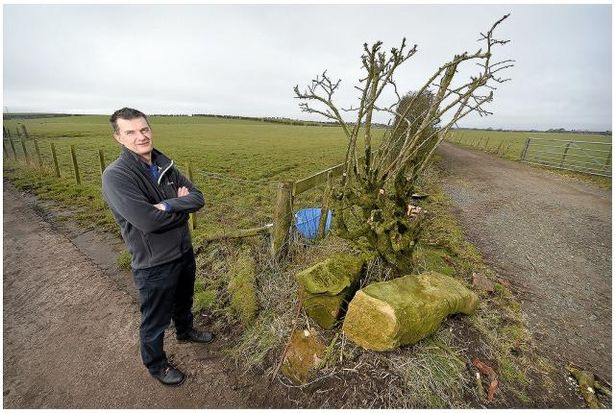 Kenneth, 52, added: “He did not reveal himself to be Deputy Führer, giving the name Captain Alfred Horn. He was taken first to the Home Guard HQ in Busby and later to Battalion HQ at Giffnock.

When World War II ended, Hess was tried at Nuremberg and held at Spandau Prison in Berlin until he hanged himself with an electric flex in 1987 aged 93.

Mystery has always surrounded his arrival in Scotland. Official records of the incident are under seal until next year.

Kenneth said: “There are so many theories but I think he was hoping to meet the Duke of Hamilton to broker a peace deal. It would probably have been a promise that Germany would stop attacking Britain if they agreed to turn a blind eye to the invasion of Russia.